a few words from jamey whetstone

Firing up the 4-wheeler and hitching up the rickety wooden trailer loaded with green-growing vines;
Feeling the tears streaming down my cold cheeks as I drive down tractor rows to place the trays of vines for the crew;
Clanking of chains at the vineyard gate in the pitch-black darkness of a summer morning;
Listening to Mariachi music from the car radios as folks spill out pulling hoodies over their heads;
Hearing shovels and picks “shushing” into the soil or clanging off a rock while digging holes for new vines;
Picking up conversations as the sun rises and feeling very pleased I took the two semesters of Spanish at the local JC.

All these things make up the magic of the vineyard.

Depending on the soil makeup, between 800 and 2,000 plants go into the ground during the workday. Just after sunrise, but before the fog clears from the valley floor some 2,800 feet below, I get to look south as hot air balloons penetrate the clear air like small pinheads of color. At day’s end, after I have cleaned up all the empty trays, I hit the pool for a cleansing plunge to wash the dirt from the vineyard away and jump into my pickup truck for the ride home. Riding through the vineyard, I can see the beginnings of wine that will magically come from all this labor.

The luxury for me has always been the vineyard work I was afforded the first 6 years I was in the business. And the anecdote above is one of the seminal tenets of my winemaking education. 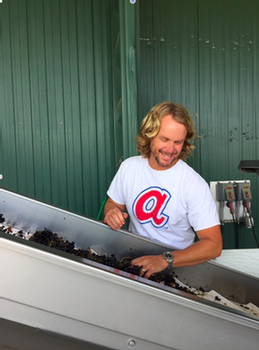 While I don’t have all the knowledge I want from a vineyard management standpoint, I do have a base to draw from that spans 25+ years across a wide variety of locales. I definitely know what I want in the finished wines I make. So when I am out there looking for vineyards from which to make Whetstone wine, I look at many different facets beginning with the varietal. Then comes sun exposure, water availability, soil makeup, proximity (or lack of) to the winery, farming, vineyard owners, any other grapes already growing nearby, etc. The relationship between vineyard and winery is exactly the same as a marriage. So I am real thoughtful when engaging in this kind of commitment. What makes a vineyard special can be any number of things. Ultimately, it is about the end product and what you, as a winemaker, want from it. Also, until you have made many vintages and gone through seasons with a given spot, it is tough to figure out if you have something unique. Winemaking, for me, begins and ends in the vineyard. The cellar is icing on the cake and a chance to reflect on what you did/did not do well during the growing season.

Catie’s Corner Vineyard is a very robust vineyard, planted in 1995 from clones that originate from a small town called Condrieu in Northern Rhone. I love this spot, especially the dried up creek bed with Goldridge loam and river cobble soils on a small knoll facing mainly southwest.

Quadrilateral cordon trained and spur pruned, this vineyard was planted with high production in mind. The vineyard could easily set 6-9 tons per acre, but I wanted something in the 3-4 ton range. We worked out an acreage contract that allows me to thin drastically by dropping fruit throughout the growing season yielding an average of 3.4 tons over my last 16 harvests.

It gets plenty of sun, but is tempered by some foggy early mornings being just north of the Windsor airport and a bit outside the heart of the Russian River Valley. I like the varietal correctness in terms of resulting flavors and bouquet, so I pick at ripeness that showcases those qualities. I love the apricot, peach liqueur, honeysuckle and licorice that comes with Viognier when grown correctly.

Once I get the fruit into the barn, the wine makes itself - whole cluster pressing direct to barrel and into a cold cellar usually does the trick. New oak on California Viognier baLLOOOWS!! Needless to say I only use neutral French oak barrels.

Bob Jenkin’s Pleasant Hill vineyard sits smack dab in the heart of Russian River Valley just west of the town of Sebastopol: one of those no-brainer spots for cool climate Pinot Noir. The vineyard itself is all Goldridge loam soils where Dijon, 115, 667, and 777 clones thrive. The exposure to sun is east west and is tempered by cooler daytime highs (normally in the 70s and low 80s) throughout the summer growing season.

Charlie Chenowith planted this spot 18 years ago and has been farming it since. He and I are in lock step when it comes to vineyard management and rarely differ on what to do next.  This area is widely known for it’s foggy mornings from June through September, which is where the acidity comes from.

The soils are well drained and the vines are healthy due, in part, to the lower annual yields that don’t stress the plants. This low stress is also a big reason the wines are so voluptuous and centered around Bing cherry cola flavors.

Since my first vintage in 2003, our blocks - comprised of two-thirds clone 115 and one-third clone 667 – have averaged 2.4 tons per acre. I like to complement the fruit with 35% new French oak barrels and usually a 16-month elevage sur lees.

The Walala vineyard was planted in 2001 and is way up in the northern end of the Sonoma Coast appellation in Annapolis (hence the name, which is a riff on nearby Gualala River). There is a stunning, wild beauty that attracts me to this spot: wild boars, lots of wild turkeys, grouse, doves, quail, bobcats, all of which I see regularly while driving around or walking in the vines. While it is only about 89 miles from my house, it takes 2.5 hours to reach.

Perched on top of a knoll from which you can see the Pacific on a clear day, the vineyard gets lots of sunlight from above the fog line. Soils are a mix of alluvial and Goldridge loam; rocky, red to deep brown, ferrous soils leach some of the color out of the resulting wine and give it that ruby hue.

A bit hotter on most days than down in the Russian River Valley, the fruit flavors are bold due to the sugar development, but also retain wonderful acidity due to the earlier harvest dates. We work with a variety of Dijon clones including 113, 828 and 115. Yields are super consistent at around 3 tons to the acre. I went with 35% new French oak and the requisite 16 months in barrel.

Phoenix Ranch is up Atlas Peak Road, just north of the Whetstone tasting salon in Napa. The key here: a cool spot in a warm climate. Most of Napa Valley gets downright hot during the summer, but at the southern end of the valley the San Pablo Bay makes its presence felt. The cold air that scoots off the Pacific and spills into the lower sections of Atlas Peak extends the growing season by as much as 3 weeks as compared to farther up valley.

The soils are dark brown, loamy with pockets of clay and very well drained. Parts of the vineyard have been historically prone to frost both in late spring and again in mid to late October. Naturally low yielding and late ripening, it’s perfect for what I am looking for in Syrah. Since the Northern Rhone palate is where I want to be, the pepperiness from prolonged hang time coupled with Estrella, Durrell, & Syrah Noir clones make for an honest shot at mimicking my French brethren.

I generally ferment north of 60% whole cluster and age for 30 months in neutral French oak barrels. And apparently it turned out alright since Michelle likes to joke that this is the wine she married me for…